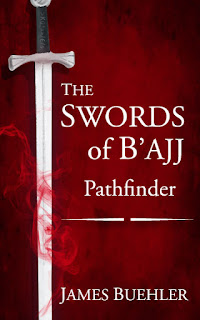 The sequel to James Buehler's The Swords of B'ajj Truthseeker is now available! Read through an excerpt, and don't forget to enter his giveaway at the bottom of this post.

BLURB
Steve Wolfe faces a tough decision. Does he track down his kidnapped sister using Pathfinder, his mystic sword, or does he exchange a friend for her safety? While traveling across the United States searching for clues to her whereabouts, he and his friends discover that a little girl also needs their help. Will time run out before they help everyone, or will someone become a sacrifice to save the others?
ABOUT THE BOOK
The idea for this series of five books came to James as a teen. He dreamed of having a sword like the ones in his book and imagined what it would be like to own such a sword. He decided that he should write down his ideas and thus the journey began. The Swords of B'ajj started with Truthseeker which came out September 19, 2011.It continues with the second installment, Pathfinder. It debuted July 13, 2015. James is working on the third episode of the series, Timeline.
EXCERPT

Tons of thoughts sped through her mind. Where can I hide? Who are these people? Why are they after me? These questions raced through her mind over and over, but she couldn’t answer them. She had never seen anything or anyone like those people chasing her before, nor could she even comprehend the past few hours.
A temporary hiding place presented itself in a poorly lit alley behind some unevenly stacked wooden crates each measuring about two feet by two feet by two feet. They lined the building walls starting at the alley entrance, continuing about halfway down into the alleyway. She felt as safe as she could at the moment, but was sure that would change.
She scanned the crates. They smelled like decomposing garbage. However, she couldn’t be picky about where she stayed as long as she remained hidden. Maybe the stench would mask her presence.
She started to ease into a spot between a couple nicer, less smelly ones, only to startle a rat. It bolted past her, fleeing further into the alley.
“Great.” She winced, but continued to sandwich herself between the crates as best she could.
She crossed her arms, resting them on her knees. Exhaustion crept in, forcing her to lay her blonde head on her arms. She had been running for about an hour now, somehow always staying slightly ahead of her pursuers. All she needed was a moment to catch her breath so she could think things through.

WEBSITE
FACEBOOK
TWITTER
GOOD READS
GIVEAWAY
See this #AmazonGiveaway for a chance to win: The Swords of B'ajj: Pathfinder. Bookpound Readers NO PURCHASE NECESSARY. Ends the earlier of Nov 10, 2015 11:59 PM PST, or when all prizes are claimed. See Official Rules http://amzn.to/GArules.