Author Brett T. Magnuson Mazzoni has a lot of irons in the fire. Besides writing his own fiction, he has also started Broke Author Publishing. I love to see how authors handle the business side of their work, and Brett seems to have a terrific plan. Many thanks, Brett, for taking the time to join us at the BookPound!

Tell us about the writing process for Mariner of the Stars. How long did it take? Did it morph along the way?

To be honest there was no specific writing process for Mariner of the Stars. I worked on the book whenever time allowed seeing as I was working full time and going to graduate school full-time which is still the case. With that kind of schedule dedicating all of your time to writing a book is not possible. I suppose if I were to say that there was a writing process it was this, I tried to dedicate at least an hour to the project each week whether it was the actual writing portion of it or the editing/revising process. It's hard to say exactly how long the project took because it's an idea that I came up with nearly five years ago, wrote a draft, and got away from to focus on other projects. When I finally dedicated all of my time to the book I'd say it took around six months to complete the entire process that includes rewrites. I'd say that things certainly morphed not only with the process but with the story. Whenever I had a break from classes, I would spend a lot of time working on the manuscript, trying to get as much of it completed as possible. As for the morphing of the story, it took a lot of turns that I didn't expect as all of my projects do because I "fly by the seat of my pants" as writers say and don't plan out every detail of the story but let the story write itself. Generally, I have notes for each idea I come up with which includes the characters and the plot and then I let the story write itself from there. 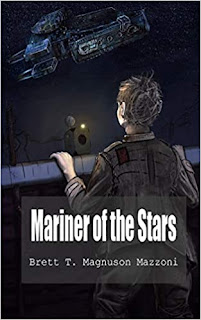 I suppose the answer to this question depends on the genre as I read and write in several. In the Science Fiction genre, one of my favorite authors and a big inspiration for my work is the late Philip K. Dick. I also enjoy the works of those who are considered to be "the classics" such as Issac Asimov and Edgar Allen Poe. I'm also a very big fan of John Scalzi. In the genre of mainstream fiction, my favorite author is certainly John Steinbeck. I love how he was able to capture the human spirit and express the emotions of his characters in his writing which is something I try to do in my own work for I think it helps readers connect to the characters. In the nonfiction areas of which my interests lie political theory, I really enjoy the works of Thomas Sowell, Ron Paul among others. I also enjoy the works of the philosophers of the past such as Locke and those sorts.

What was your motivation for starting Broke Author Publishing? How does it work?

I decided to start Broke Author Publishing due to the monopolization of the publishing industry. If you look at it, three or so major publishing companies dominate the industry and if there are smaller ones out there, they're probably owned by one of these gargantuan firms. If that's not bad enough, they won't give you the time of the day if you don't have an agent and an established name for yourself, and the time it takes to get an agent is ridiculous. You'll be ancient by the time you get one and they too seldom pay you any mind if you don't have a name already established. In my opinion, this makes it nearly impossible to publish traditionally. I decided to utilize the technology available at our fingertips and form my own company which allows me to steer clear of the obstacles of the traditional route. I also wanted to keep more of the money I make on sales. Of course, Amazon takes their cut but that's one entity taking their share as opposed to two, a publisher and an agent. Another motivator was seeing the success of my good friend and fellow author Charles Millhouse who for the past twenty years or so has been publishing under his own company and has seen some fairly decent results. He was a big help in the process as I was learning to do it for the first time.
Broke Author Publishing works like this: I complete the entire process, writing, rewriting, edits, cover art, etc. and then format it for and upload it to Amazon utilizing their KDP service and distribute it via paperback and ebook. I am looking into expanding onto other services as well. I'm currently looking into Smashwords. Currently, the company publishes only my work and will also distribute some of the films I'm going to make in the near future. I hope to bring other authors to the company and allow them to publish under the company but that might not be anytime soon as first I seek to boost my sales first and establish the success of the company.

What advice can you offer to science fiction writers who are just starting out?

Never give up and follow your dream. Don't let anybody tell you that you can't do it. Use their doubt and negativity to fuel your motivation and look to your favorite authors as inspiration because they would not have succeeded if they gave up. Also, always continue to improve your writing style. No matter how good of a writer you might be there is always room for improvement. Make sure you read, you can't be a good writer if you don't read. This is true for many reasons but most importantly to continue to expand your knowledge of whatever language you speak/write in.

Are you working on any new writing projects?

Currently, I am formatting my next manuscript for Amazon. The book is titled Omega: The Rise and Fall of Empires which is the first part of a six-part series. When this step is complete, it will go through a final edit and then I'll be negotiating with my artist. I'm also starting extensive research for my first nonfiction book which makes the case against socialism.

Is there anything else you'd like to tell Book Pound readers?

Thank you for taking the time to read this interview. I hope you check out Mariner of the Stars and share it with your friends and family. I also greatly appreciate reviews. I also write a blog that focuses mainly on social issues. You can read it here: btmmallthingsblog.wordpress.com. You can also follow me on social media.
Twitter: @Brettmagnusmazz
Parler: @BrettTMagnusonMazzoni, Parler name is Brett T. MM
Labels: Interview