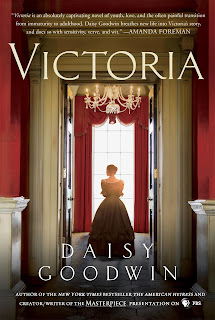 SUMMARY (from the publisher)

You've seen her on the screen, now read her story...

From the creator of the ITV Sunday night drama, VICTORIA, now in its second year, comes the novel by Daisy Goodwin, author of the bestselling MY LAST DUCHESS and THE FORTUNE HUNTER.

In June 1837, the eighteen-year-old Victoria wakes up to find that she is Queen of the most powerful nation in the world. Can this tiny girl prevail against the men who believe that women are too hysterical to rule? And what are the secrets behind her famously passionate relationship with her husband, Albert?

From one of our greatest historical writers comes a new take on one of our most beloved monarchs... Victoria as you've never seen her before.

REVIEW
Over the past year, I’ve seen Queen Victoria everywhere. She has a larger-than-life statue in Leeds Town Hall. I've seen her dollhouse and dresses on display at Kensington Palace. And all up and down the United Kingdom, I've heard tour guides talk about the monarch. It’s hard to imagine the U.K. without Victoria; that’s why I’ve wanted to learn more about the woman behind the legend.

This book isn’t a biography. It’s historical fiction. Sometimes I find that it’s easiest to digest a chronology when it’s presented through narrative, even if every detail isn’t factually accurate. A story helps my brain to build a structure where facts can be hung as I add them through learning later on.

I believe that kind of structure is what we have in this novel from Daisy Goodwin, who is the writer and creator of Victoria, the Masterpiece presentation on PBS. From what I know, this is quite a faithful representation of the monarch’s life, and the historical details are delicious.

It’s hard to imagine the kind of pressure the teenaged queen faced. Having been sequestered in Kensington during her childhood, she knew little of the world outside. Her foreign-born mother sheltered her so much that Victoria wasn’t allowed to walk down a staircase without holding the hand of her governess. She recognised that Sir John Conroy was trying to control her, that he wanted to be a puppet master, given a chance.

Despite the pressure, Victoria seems to have had a mind of her own, even though she had to rely on the judgment of others as she learned how to govern and rule.

My only complaint is that it seemed to end more suddenly that I wanted. After so much investment in Lord Melbourne, I wanted to hear more about what he did after Prince Albert came on the scene.

I listened to the audiobook and was so impressed with the narrator, Anna Wilson-Jones. If you have an Audible subscription or access to a decent library, give it a listen.
Labels: book review