REVIEW of RECORDS OF SHELLEY, BYRON AND THE AUTHOR by Edward Trelawny 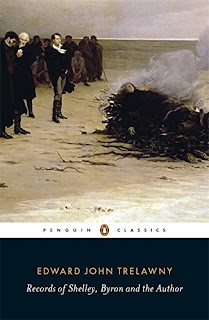 SUMMARY (from the publisher)
In February 1822 the writer and adventurer Edward John Trelawny arrived in Pisa to make the acquaintance of his heroes Shelley and Byron, leaving a broken marriage and an exotic seafaring career behind him. He became a close companion to them and their circle, and this collection of his reminiscences is one of the most fresh and intriguing documents of the Romantic age. It records his initial meeting with a cynical and flippant Byron, his impressions of a youthful, otherworldly Shelley and, most memorably, the poet's death at sea and the subsequent burning of his body on the sand. Trelawny's Records combine vigorous prose, vivid description and mythmaking to create one of the most memorable portraits of an age.

Rosemary Ashton's new introduction explores the mysterious life and quixotic character of Trelawny, and this edition includes all the author's later revisions.

Edward John Trelawny (1792-1881) was one of the most curious figures of the English Romantic Movement, and spent his long life travelling extensively as a naval officer, biographer and adventurer. After a brief education, Trelawny was assigned as a volunteer in the Royal Navy by the age of thirteen, and led an unaccomplished naval career until his resignation at nineteen. He met Shelley and Byron in Italy in 1822, where he became fascinated, almost hypnotized, by the two poets. His Records of Shelley, Byron and the Author, written after both their deaths, is the end-product of this strange obsession. An incorrigible romancer, Trelawny had three marriages - the second of which was to Tersitza, sister of the Greek warlord Odysseus Androutsos, whose cause he had joined and whose mountain fortress he looked after when Odysseus was arrested. He died after a fall at the age of eighty-eight, in England, and his ashes were buried in Rome in a plot adjacent to Shelley's grave.

REVIEW
How to describe Edward Trelawny? Perhaps he’s a learned English gentleman with such an insatiable taste for adventure that he must spend his days camping across the Continent, sailing the high seas, and joining foreign wars. Yeah, that’s not bad.

At age 86, Trelawny was the last surviving member of the “Pisa circle” surrounding Shelley, so he gathered all the old surviving documents and wrote what can only be described as a celebrity tell-all, 19th century style. His close association with Lord Byron, Percy Bysshe Shelley, Mary Shelley, the Leigh Hunts, etc., gives insights into these literary luminaries that we don’t usually find.

Although the book rambles in places, it’s still quite interesting. I have a sneaking suspicion that I should take all of his stories with a grain of salt, but the letters back up most of his claims.

I’d say the book can be divided into three parts:

I love getting glimpses into the lives of literary figures, and this book offers plenty. Trelawny himself might be “the world’s most interesting man,” but then again, he might just be a gifted storyteller. Either way, this book is a great read, especially for people who love history, English literature, and travel.