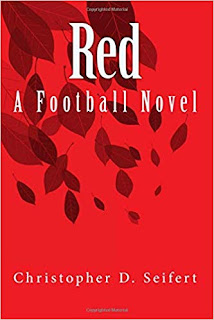 SUMMARY (from the publisher)
Two brothers, one team, and the greatest season ever told ... Teenage brothers Charlie and Robert Hall couldn't be more different. Charlie is seventeen. He's perpetually chipper, the loveable goofball – a hopeless optimist. Robert is fifteen going on fifty. He's gruff, sarcastic, a hapless underachiever. Only a mutual passion for football – Red football – unites the brothers. When Charlie angers school bully Justin Stankoski, the brothers find themselves targeted for revenge, and Robert must choose between loyalty to his brother and the safety of the sidelines. Meanwhile, as Red football battles through a season of adversity in pursuit of the national title that so narrowly escaped it one year before, the brothers learn something about life, football, and what it means to be a true fan.

REVIEW
I was charmed from the start of this one. It reads like a John Hughes movie, but the story and the characters have real heart. The teenage lunchroom hijinx take on life-and-death importance when seen through 15-year-old Robert Hall's eyes, and if you really think about it, that's how it is when you're 15.

Torn between his desires to fit in and his loyalty to his brother, Robert struggles to navigate his sophomore year of high school. Through encounters with bullies and torment over a crush, the one outlet that brings him pure joy and unites him with his brother Charlie is Red football. The college football season provides structure and excitement to the boys' lives, and recaps of each of the winning season's games are interspersed among the chapters that make up the narrative. These interludes give us a peek into Robert's hopes and dreams, especially when he seems to have given up on school and his social life.

The author paints adolescence masterfully, in all of its cringe-worthy details, and at times I found myself transported right back to my own 15-year-old life. The writing is beautiful, and the author leaves us with a sense of gratitude and nostalgia, even though the events in the novel are as normal and every day as can be.

This novel is well worth your while. Hopefully, we'll be seeing more from Christopher Seifert.