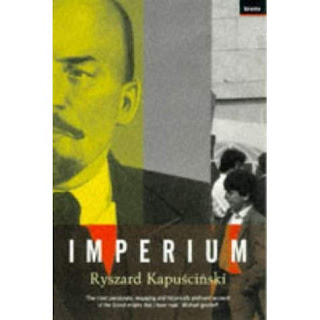 Summary (from the publisher):
Imperium is the story of an empire: the constellation of states that was submerged under a single identity for most of the twentieth century - the Union of Soviet Socialist Republics. This is Kapuscinski's vivid, compelling and personal report on the life and death of the Soviet superpower, from the entrance of Soviet troops into his hometown in Poland in 1939, through his journey across desolate Siberia and the republics of Central Asia in the 1950s and 60s, to his wanderings over the vast Soviet lands - from Poland to the Pacific, the Arctic Circle to Afghanistan - in the years of the USSR's decline and final disintegration in 1991.

Review
How is it that I’d never heard of the demise of the Aral Sea basin or the blowing up of the Cathedral of Christ the Saviour? Growing up in the West, I’d heard all about Anne Frank and Auschwitz. I knew about the people who starved to death during Mao’s Cultural Revolution. I even knew a bit about the Bolsheviks and their brutality during the revolution. But for some reason, the USSR has gotten a pass, despite being responsible for tens of millions (perhaps over 100 million) deaths during the 20th century.

I just finished reading Ryszard Kapuscinski’s Imperium, in which he travels around the Soviet Union, interviewing people and observing the influence of the Soviets on the diverse people included in the “republic.”

Half a year ago, I spent some time reading Gulag Archipelago by Alexander Solzhenitsyn, so I had some idea of the breadth of the depth of Soviet totalitarianism and brutality, but some of the stories in Imperium broke my heart. Here are two:

After the Russians withstood Napoleon’s attack on Moscow, Czar Nicholas vowed to build a magnificent cathedral to show their gratitude to God. The Cathedral of Christ the Saviour took 45 years to build and was perhaps the most magnificent building in the empire.

When Stalin came to power, he announced (in Pravda) the construction of a new palace. The news piece included the address where the palace would be built. Those who knew the city well would have recognized the address as the location of the Cathedral of Christ the Saviour. Stalin ordered the destruction of the cathedral. But first, it would be looted. Once every precious stone, chandelier, religious vestment and work of art was removed, workers wedged sticks of dynamite into the stones and blew it up, piece by precious piece. 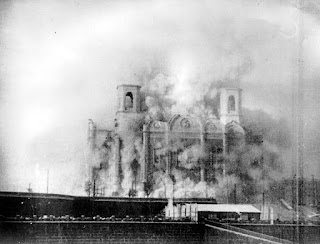 The palace Stalin had announced in Pravda was never built. Later on, Khrushchev built a swimming pool on the grounds where the cathedral once stood.

Kapuscinski compares the Cathedral of Christ the Saviour to Notre Dame in Paris or St. Paul’s in London. I couldn’t help comparing it to the Salt Lake Temple of the Church of Jesus Christ of Latter-day Saints. Some of my ancestors helped in the 40-year construction of that building, which happens to have been built during the construction of the Cathedral of Christ the Saviour. I cannot imagine how I would react if the president of the United States looted that temple and then blew it up, knocking down the hand-hewn blocks of granite painstakingly transported from the mountains using horses and wagons. I cannot imagine.

And then there’s the Aral Sea, which used to support communities of fishermen, craftsmen, and agricultural workers. When the Soviet leaders decided Moscow needed more cotton, they ordered all of these people to quit their trades and start planting and harvesting cotton. In order to produce more and more cotton, a river was diverted, upsetting the delicate desert ecosystem. The flooded plains were soon awash in salt, which had lain three feet beneath the earth’s surface. The river dried up and couldn’t reach the sea any longer. Amazingly, Soviet leaders actually considered blowing up two mountains with nuclear bombs in order to provide more water for their precious cotton production, but they knew the rest of the world would respond critically to such a project, and they wouldn’t be able to hide it. Today, the Aral Sea basin is ruined, a Soviet legacy that won’t soon be corrected.


These are two very short episodes in an amazing book. Kapuscinski’s writing manages to be both poetic and precise. Written like a travel log, the book doesn’t have an overall story arc, so it took me a while to get through it. Still, I can’t recommend it highly enough. It’s a sobering reminder of the tragedy that inevitably follows an embrace of authoritarianism.