A few weeks ago I was walking back to my place from the store when I ran into Ryan Tomlin (aka R.J. Tomlin) on the street. He was selling poetry. Being in a hurry, I walked right past him, but then I stopped and went back. How could I resist an independent author selling poetry right here on the streets of Leeds? 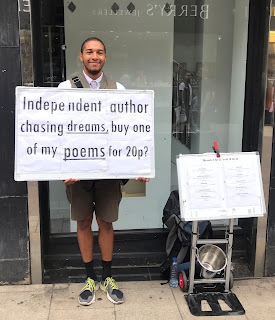 Ryan was also promoting his latest novel, and I'm thrilled to have a guest post by him today at the BookPound. Personally, I find Ryan's advice in this post to be both liberating and motivating. Thank you, Ryan. Cheers!

The Campfire Technique – Why Writing Isn’t Always That Difficult

Writing a book can be daunting – anyone who’s given it a go will agree. Whether you’re writing an autobiography about your personal life and struggles, a dark thriller set in a dead-end town, or an epic fantasy series based in an imaginative, dangerous and enthralling world, if it’s not the story itself that’s hard to come up with, it’s the words you use to tell that story. And even on the rare occasion that those two line up, it always seems like it’s at the worst possible time. The world’s greatest poem might flow through you whilst you’re in the shower, but the moment you step out its gone. A walk through the park might fill your mind with an idea of a nine-book series that’s destined to be a best-seller, but the moment you get home it’s disappeared. Put simply; writing isn’t easy.

What’s always confused me about writing is that some best-selling authors channel their stories with complicated language, and vivid, distinct scenery, whilst others write just as engaging stories using basic vocabulary and short, sharp sentencing. My favourite author is Anthony Horowitz, and throughout the 23 books of his that I’ve read (Diamond Brothers series, Alex Rider series and the Power of Five series), I’ve rarely stumbled across a word I didn’t understand, or such a complex development of the story that I struggled to follow it. But despite this, each and every one of these tales has captured me like no other, and the worlds and places he’s taken me have been some of the most gripping and impactful… but how?

I call it The Campfire Technique. I’ve written various books myself – ten in total – and I’m not one to say whether or not those books are examples of fine literature. But through these stories I’ve gone on many adventures; I’ve navigated through a series of hidden tombs in the Amazon Rainforest, prevented various terror attacks across the U.K, and even invented a machine in order to save the population from extinction following a post-apocalyptic meltdown. I find it easy, as many do, to write and describe things that are close to my real-life experiences – an early morning walk through a misty park, or a hectic car ride through a busy city, standing on the edge of a train platform in the rain. However, when writing a new story, whether based in an extremely imaginative worlds, or one just like our own, I can honestly say it’s a rarity that I really struggle to keep my writing rhythm going. We all have a writing style – descriptive words we like to use, or a format in which we structure things – but when what others call ‘Writer’s Block’ shows itself, all of this goes out the window. And for myself too. So how do I prevent this stopping me from writing? To me, it really is simple; I stop thinking so hard, I relax, take a deep breath, and imagine myself by a campfire, telling the story to my friends or family.

I remember times as a child being told stories at campfire with the scouts or on school trips, and I can honestly say that some of stories I remember to this day. Was it their vivid language and deep characterisation? Was it there complicated sentencing structure, or use of punctuation? No… it was the fact that the basics of the story were told so well, that they didn’t need any of the complications.

When I first started writing books, I was so obsessed with structure and order – with using intelligent words and attempting to fill the readers mind with such sinister and unique settings – that, in ways, I lost track of the basis of what I was doing… simply telling a story. If what I was trying to say could be described in a few sentences, why go on for half a page? If it can be described in three simple words, why use five complicated ones? It’s easy to get addicted to the amount of words you’re writing, but if not each and every one of those words is making a difference, then there isn’t much point. The same way an incredible album might sound just as good stripped down to an acoustic ‘live lounge’ version – all the other parts are a nice addition, but they don’t really make it any better.

The Campfire Technique is telling the story in its most basic form. Whether applied to a whole story, a scene, or just a paragraph. If you’re struggling to move on the story, strip down to the basics – describe the scene in a sentence, focus on what the characters are saying, use short, simple sentences – and you’ll find the flow of the words coming a lot easier. Like I said, close your eyes, and pretend that you’re sitting by a campfire, telling it to your friends and family.