REVIEW of NORTH AND SOUTH by ELIZABETH GASKELL 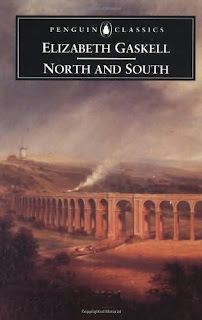 Summary (from the publisher)
As relevant now as when it was first published, Elizabeth Gaskell's North and South skillfully weaves a compelling love story into a clash between the pursuit of profit and humanitarian ideals. This Penguin Classics edition is edited with an introduction by Patricia Ingham.

When her father leaves the Church in a crisis of conscience, Margaret Hale is uprooted from her comfortable home in Hampshire to move with her family to the North of England. Initially repulsed by the ugliness of her new surroundings in the industrial town of Milton, Margaret becomes aware of the poverty and suffering of local mill workers and develops a passionate sense of social justice. This is intensified by her tempestuous relationship with the mill-owner and self-made man John Thornton, as their fierce opposition over his treatment of his employees masks a deeper attraction.

In North and South Gaskell skillfully fused individual feeling with social concern, and in Margaret Hale created one of the most original heroines of Victorian literature. In her introduction Patricia Ingham examines Elizabeth Gaskell's treatment of geographical, economic and class differences, and the male and female roles portrayed in the novel.

This edition also includes further reading, notes and a useful glossary. Elizabeth Gaskell (1810-65) was born in London, but grew up in the north of England in the village of Knutsford. In 1832 she married the Reverend William Gaskell and had four daughters, and one son who died in infancy. Her first novel, Mary Barton, was published in 1848, winning the attention of Charles Dickens, and most of her later work was published in his journals, including Cranford (1853), serialized in Dickens's Household Words. She was also a lifelong friend of Charlotte Brontë, whose biography she wrote. If you enjoyed North and South, you might like Jane Austen's Persuasion, also available in Penguin Classics.

Review
One of the hurdles modern readers have to jump over if they're going to really enjoy 19th century fiction is that pacing has changed remarkably in the last 150-200 years. Today's mass-market paperbacks read like thriller movies. Modern readers seem to crave plot-driven, conversation-led fiction. We want chapters to end on cliffhangers so we'll be compelled to keep reading.

Gaskell wrote North and South in a different environment. Imagery and description were not only expected but in many ways were necessary for readers who had limited experience. Today's readers have vicariously experienced so much more than Gaskell's readers would have. They didn't have television, movies, Periscope live streams, or phone-shot videos on Twitter. In many ways, modern readers don't need as much description because we've seen so much and our minds can fill in the gaps left between action scenes and conversations.

On the other hand, we haven't lived in 1855. We don't have high-definition video from that era to help us understand how sooty and smoky an industrial northern English town would have been. Most of us haven't experienced what it would have been like to watch a young woman waste away for wont of clean air, healthy food, and possibly antibiotics. And for this, we're grateful that nineteenth-century authors tried hard to include so much imagery and description.

North and South tells the story of the Hale family and especially of the 19-year-old daughter Margaret. Margaret's father, a clergyman, has a crisis of faith and feels that he can no longer lead his parish in good faith since he's unsure of some of the basic tenets of his religion. This crisis of faith leads him to give up his comfortable position in the south of England. An acquaintance suggests that he seek employment as a tutor to one of the new "masters of industry" in the north. The family relocates to Milton, a bustling industrial town in the north, and they're shocked at the differences in the people and the culture.

The issues discussed in North and South are still being discussed today, perhaps more than ever before. What kinds of education are best for preparing people for the future? Do labor unions hurt or help the people they serve? What kinds of obligations do governments and churches have to care for the poor? How much should you sacrifice for a clear conscience?

Gaskell has created some memorable and interesting characters in this novel. Margaret Hale is, in many ways, a typical Victorian heroine, but she's more complicated than some of the other female protagonists of the era. For someone so young, she has firm opinions about a variety of topics, but her new experiences in a new town help her to see the world as more complicated than she initially thought it was. This leads to great personal growth and a greater capacity to help those around her.

I can't wait to watch one of the several film productions based on this novel. I already miss the characters.
Labels: book review