REVIEW of AROUND THE VILLAGE GREEN by Dot May Dunn 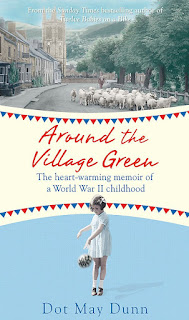 Around the Village Green
Dot May Dunn
2014
Orion Publishing

SUMMARY (from the publisher)

It's 1939 and little Dot May Dun is playing with her brothers in the quiet lanes of their Derbyshire village. The grown-ups' talk of war means very little to Dot but things are starting to change in the village, for good.
When a prisoner of war camp is built close to Dot's village, and a Yankee base is stationed nearby, Dot makes friends with the most unlikely of soldiers. But her friendships are threatened when telegrams start to arrive in the village and the real impact of war bears heavily on this close-knit mining community.
From little lives spring great tales. Dot's childhood memoir shares the universals of innocence, love, loss and friendships. THE VILLAGE will move and entertain in equal measures.

Around the Village Green begins in the late 1930s, when the author is less than five years old and it continues through the War, ending in 1945. The brilliance of this memoir is that it captures childhood so well and gives us new insights into an event we've all read and heard so much about from many different perspectives.

I think it's quite difficult for adults to write from children's perspectives. It's simply been so long since we've thought like children. It's even difficult to remember what we knew then and what we still had to learn about. Dunn is so good at defining these lines. As a reader, I often found myself inwardly chuckling at the misunderstandings caused by children not quite understanding what a certain phrase meant or by reading more into a situation than was there.

For instance, the children have heard that there are German spies around the village, and it was true that a German POW camp was set up nearby. But the children start suspecting that certain villagers are spies. They don't have much to go on, but they do know that "Heinz" is a German name. So when a Heinz advertising poster goes up in a shop window, they decide to start watching the shop closely to see if Germans are involved.

Some of my favorite parts of the memoir were the episodes in which the author's family was exposed to foreigners. Dot's mother, especially, was wary of Americans and Germans. The American soldiers are stationed nearby, and the adults suspect them of being bad influences on the children. None of the children have ever seen gum before the Americans arrive, and soon the soldiers are giving out pieces of gum to the village children:

As suspected, nothing gets past Father and the next evening he gives us a sound lecture on the evils not only of begging from others but also of chewing gum. Gum, it seems, can damage every part of your inner workings, from stopping you breathing if you inhale it to stopping up your digestive system if you swallow it. I wonder why the Americans have come to fight the Germans, as it appears that most of them will die from gum before they even get going.

Dot's father invites three of the American servicemen over for tea, and they soon become friends. In the end, Dot remarks that "they have brought something that we have not known before, a sunlight and brightness in contrast to our dark and austere winter."

And then there are the Germans. The Germans have caused untold misery for the British people during the war. Dot's Uncle George and her friends' father have been killed. The whole village has lived with air raids and rationing and fear and constant threat of attack, all because of German aggression.

So when Dot's father asks a young German POW over for tea, Dot's mother is furious. The children all expect this German to be mean and angry and ferocious, and they're shocked when they see who he really is:

"His hair is very fair---almost white--and when Father introduces me to him I expect a triumphant and superior look, but he is pale and tired-looking, and his eyes are full of fear and sadness. I had been determined to hold my head high, to be defiant, and to let him know that I am not afraid--that I too can hate. In my mind he has killed Uncle George and Arthur and Bert's father; he has even bombed the cities around us. But now I know as he stands here, I can see that there is nothing to hate. I can't get a grip on any part of him to hate."

Not only does the family learn to love this 18-year-old German boy who is scared and homesick for his mother and sister, but he becomes like a member of their family. When he is transferred to another camp, he leaves a hole in their family and in their hearts. At one point, he rescues Dot's mother and cares for her as if she were his own mother.

It's a heart-warming memoir that will increase your faith in humanity. I'm living in Leeds, UK, right now, and I was telling an older woman about the book because I had been reading it on the bus. She said, "I was five years old when the war started. Can I see it?" She looked through the book, nodding and smiling, and then she told me about how she actually liked the air raids as a child. Her mother had fitted out their cellar with little beds and cushions, and when they had to be down there, she let them eat the fruit preserves that were ordinarily set aside for special occasions.

Childhood is a magical time of life, even in difficult circumstances, and Dot May Dunn captures this perfectly in Around the Village Green. Difficult topics are treated with reverence and respect, and you'll find plenty of opportunities to laugh as well.

Learn more about Dot May Dunn here, or check out her other books, including Christmas Around the Village Green.
Labels: book review