REVIEW of HEARTWOOD by LEA CARTER 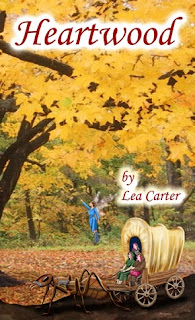 SYNOPSIS (from the Publisher)
In the midst of his struggle to adapt to the fact that he will never fly—let alone walk—again, fairy Prince Isaac of the Wood Fairy Tribe meets a lovely doctor who claims that she can heal him. He would be a fool not to take the chance, but only he can heal the scars on his soul, scars won in a bitter fight against pirates mere months earlier.
Doctor Cassidy Clark is a skilled surgeon, accustomed to her well-ordered life in the volcanic-glass domed cities of the Water Fairy Tribe. Confident that she could help the wounded Wood Fairy prince, she left her home, risking the secret of her tribe's existence. Now she finds herself stranded for an entire season at the Wood Fairy capital city of Weetu, tucked away in an old sugar maple.

Will she be sensible enough to keep her distance or will she succumb to Isaac's winning ways?


As we meet the protagonist Isaac, he is recovering in the hospital from serious wounds sustained in battle. While I don’t usually think of fairies as warriors, it works, and I found myself being quickly drawn into the characters, their back stories, and their world of fairy tribes and royalty.

Even though this is the the book in the series, it’s not a problem to jump into this story as a stand-alone. The dialogue is charming, especially between Isaac and Cassidy.

By starting this story at the beginning of Isaac’s rehabilitation, the author has a chance to explore some important themes. Isaac is adjusting to life in a wheelchair, and this, of course, is not easy. He experiences frustration, exhaustion, and a self-consciousness that is new to him. Although we don’t all have experience with physical disability, we all experience losses, and this story helps us to make sense of loss.

Enjoy the camaraderie and good humor of this cast of characters. Kudos to Lea Carter for bringing them to life!

Connect with Lea Carter on Twitter and Facebook, and be sure to check out her entire Silver Saga series.
Labels: book review