REVIEW of SILENCE OF STARS by HOLLY J. WOOD 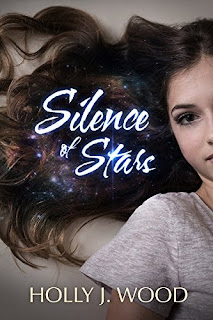 SUMMARY
For as long as she can remember, Lark Taylor has been looking to the stars but she never dreamed that someday she d find herself among them. She is Chosen to join an intergalactic academy attempting to save Earth s toxic society from self-destruction. Lark relies on Gideon, her alluring, off-limits guardian, to show her the ropes.
During training, Lark feels something she hasn t felt in a long time hope. She may hold the key to saving her planet. But as her training progresses, she learns that the Academy isn t as altruistic as she thought. And the more she and Gideon try to deny their growing feelings for each other, (turns out interplanetary relationships are forbidden), the more they gravitate together.
Just when Lark thinks she has found a way to be with Gideon, she uncovers a secret that puts her, the Academy, and the people of Earth in more danger than ever before. If she doesn't act quickly, she will lose everything including the only boy she s ever loved.

This intergalactic young adult romance is a real page turner, but it has more than a riveting plot and interesting characters going for it. The novel also touches on themes that are very relevant to life in 2017 America: freedom, political correctness, the importance of history, and privacy.


Lark Taylor is just a teenager, but she knows that the world she lives in has been declining for some time. She knows this because her father left her an archive of books. Books have been banned, so most of her peers don’t know anything about World War II or Abraham Lincoln.


One day, aliens from another planet arrive to carry off specially chosen teenagers from around the world to re-educate them at a planet with a superior civilization. They learn practical skills like combat, gardening, and cooking, but they also learn about what has gone wrong on Earth and what needs to be done to fix it.


Lark falls in love with Gideon, the young man assigned to be her guardian. Dating and courtship customs are quite different on Lior than they are on Earth, but for some reason, Lark and Gideon immediately have a connection, even though interplanetary romances are strictly forbidden.


While Lark and her friends from Earth are gaining hope and confidence that they can make a difference when they get back home, a rogue member of the Council is working to sabotage any progress. Can Lark, Gideon, and the others figure out what’s going on before it’s too late?


I’m looking forward to the next book in this series. While this one ended neatly, there’s obviously more to the story that we need to know!

Visit Holly J. Wood at her website to learn more about her other books and upcoming projects.