REVIEW of ELSEWHERE by GABRIELLE ZEVIN 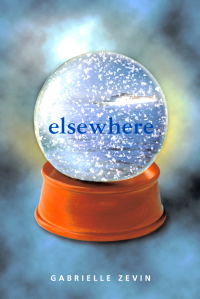 Welcome to Elsewhere. It is warm, with a breeze, and the beaches are marvelous. It's quiet and peaceful. You can't get sick or any older. Curious to see new paintings by Picasso? Swing by one of Elsewhere's museums. Need to talk to someone about your problems? Stop by Marilyn Monroe's psychiatric practice.
Elsewhere is where fifteen-year-old Liz Hall ends up, after she has died. It is a place so like Earth, yet completely different. Here Liz will age backward from the day of her death until she becomes a baby again and returns to Earth. But Liz wants to turn sixteen, not fourteen again. She wants to get her driver's license. She wants to graduate from high school and go to college. And now that she's dead, Liz is being forced to live a life she doesn't want with a grandmother she has only just met. And it is not going well. How can Liz let go of the only life she has ever known and embrace a new one? Is it possible that a life lived in reverse is no different from a life lived forward?
This moving, often funny book about grief, death, and loss will stay with the reader long after the last page is turned.
Elsewhere by Gabrielle Zevin is a 2006 Bank Street - Best Children's Book of the Year.

REVIEW
Reincarnation isn’t a topic covered in young adult novels every day, but that’s exactly what Elsewhere is about. It’s interesting to read about the author’s vision of what reincarnation would look like in the details.

Elsewhere begins with the death of 15-year-old Liz Hall. She is riding her bike to the mall to help her friend pick out a prom dress when she forgets to look both ways and is hit by a cab.

Now Liz finds herself in Elsewhere, the place people go in between their deaths and their next lives. Once there, Liz meets her grandmother Betty whom she never got to meet on Earth. Betty died before Liz was born, and it takes them some time to feel comfortable with one another. Liz also gets to know the lead singer of her favorite band back on earth. He becomes a mentor to Liz, someone she can talk to when she feels confused or angry.

Readers see this strange journey through Liz’s eyes, and she has characteristics that many people will identify with. She’s adventurous and a little anxious, and she doesn’t want to let go of the good life she had back on Earth. She’s not the most likable character in the story, but she’s well-developed and her age makes the story all the more poignant. There are so many things she didn’t get to do on earth: get her driver’s license, go to college, get married, etc. At the “Observation Decks” she can watch her family and friends back on earth, and she becomes addicted to watching their lives and hoping they’ll talk about her and miss her.

Life after death is a topic we’re all curious about, and this is an interesting take on the subject. The story is engaging, and the characters are fun. You even get to meet some talking dogs! For a quick, light read, it’s awfully thought-provoking.
Labels: review