INTERVIEW with NIKI MEADOWS, author of FIGHT FOR YOUR LIFE! 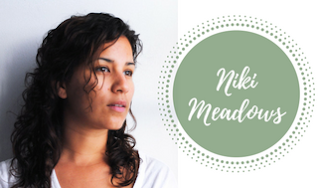 After conquering a 17-year battle with depression, Niki Meadows wrote a book, Fight for Your Life!, to help other people to overcome their struggles and take control of their lives. We're pleased to have Niki with us at the BookPound to talk about her own journey, her writing, and what's up next for her.

When and how did you decide to write a book to help others to conquer their battles with depression?

It's not something I planned on. I was actually inspired to write the book back at the end of September 2016. Once the inspiration hit me, I went with it. There were a couple of times I thought it was just a project that wouldn't go anywhere (as a creative this isn't uncommon for me). Yet somehow I'd always meet someone that would share their struggle with depression just as I was toying with the idea of pulling the plug on the project. I took that as a sign to keep writing and proceed to publish it.

Had you always wanted to be a writer? What gave you the courage to write a book?
As a kid I dreamed of being a writer. As I got older, I realized I wasn't a great or even good fiction writer so I pursued other avenues. I never even contemplated writing non-fiction so I was actually quite surprised when the inspiration hit me. Honestly, the intention that this book might support someone when they need it most was what gave me the courage to move forward. I open up about myself in a way that is uncomfortable and makes me feel naked in a room full of people. I thought that if one person could benefit from even one chapter of the book, it would be worth the temporary discomfort I felt of putting myself out there.

How has writing this book changed your life? 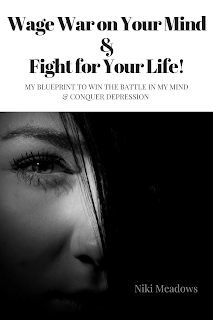 It's been very liberating. I used to think that being what I call a high-functioning depressive was a good thing. It was almost like curse and a badge of honor at the same time that no one knew how hard my internal struggle was. This book is one of the most valuable things I've been able to contribute to the world to date.

Do you have any plans to write another book? Do you have any upcoming writing projects?
Initially I hadn't really contemplated it. As the book progressed, I realized it needed to be broken up into two parts. This book is half of a four-year journey of healing. The first part details how I climbed out of rock bottom and the second part will detail the steps I took each day to get further and further away from that place. I have plans to release two separate books that will make this at least a four book series. I don't have any other writing projects aside from my personal blog.

Do you think the act of writing can help people to work through their problems? Is there a link between writing and therapy?
I believe so. I think writing is very therapeutic. There's something about the intimacy between you and your written words that's incredibly powerful for better or for worse. During my dark times it was a way to vent and drain the pain. Now it's a way to breathe life into myself and others. I encourage readers to document their journey through journaling and even include some written exercises because of my personal experience using writing therapeutically.

Is there anything else you'd like to tell BookPound readers?


I'd like to thank them for their time to read this today. I'd also like to encourage them to continue down the path that best supports them in their life. Whether it be seeking resources, surrounding themselves with positive empowering people, or connecting with themselves in a way they are comfortable living their life authentically. You deserve to live a fulfilling life filled with joy and satisfaction.