INTERVIEW with C. FULSTY, author of BLAKE AND THE TURTLES

Author and illustrator C. Fulsty coaches roller hockey, loves working with children, and would rather not eat olives and mushrooms. We're pleased to have C. Fulsty today at the Book Pound, sharing his interests and ideas with us. You can find C. Fulsty at his website, on Goodreads, Facebook, Twitter, and Amazon.


Who were your favorite authors and illustrators when you were younger? Do you think they had a big impact on your work?
My favorite author and illustrator was Dr. Seuss. I know that may be a boring answer, but you can't deny he was original and had his own style. I did like other illustrators like Eric Carle, but I just found Dr. Seuss drew you in (yes that's an illustrator joke) with his crazy and wacky illustrations. I believe he had a big impact on my work because I did start out trying to imitate his work and style. From that I did begin to find my own style and the way I felt more comfortable going with illustrations and my written work.

Where do you get your inspiration for your books?
I get my inspiration from kids today. I try to constantly think like a kid, and think about struggles kids might be facing today, or issues that a child might just want reassurance that he's not facing those issues alone. For example, I've recently been thinking about stories having to do with children changing the world, not by doing something big, but by doing something small that has a ripple effect. Always with a child-like, goofy twist. 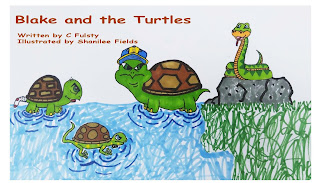 "Blake and the Turtles."

Blue is one of my favorites because I created him based on myself. In "How High Can You Jump?" Blue tries to beat Sunflower in a jumping contest, but the rock that's tied to his string keeps him from winning. No matter how hard he tries, he's just never able to shake the rock from holding him back. I've felt like that a lot with writing and life in general. I've had lots of negativity with my writing and people, even close people, doubt me and say I'm wasting my time. I've also suffered with severe depression for a good chunk of my life. So, Blue to me is just a representation that you can't let things hold you back. You have to push through.

Blake is one of my favorite characters because in my book, "Blake and the Turtles," he's a nice, sincere snake that is judged just because he's a snake. He tries to explain that he's not like other snakes, but the turtles continue to judge him on his looks. I feel like this book has a very big message to give, and even with Blake trying to fit in, he eventually learns that one of the turtles has a secret. After Blake learns the secret, he still has a positive attitude telling the turtles that they can all still be friends. Blake is just such a positive, happy character that I believe we should all strive to be like.

Do you think playing hockey has any impact on your writing?
I believe hockey has a huge impact on my writing. Hockey, in a way, is the reason I started writing in the first place. I coached youth roller hockey for around 6 years and I loved it. After a conversation with one of the parents, I started to research how to write children's books and started my career. All of this, because I was told one of my students didn't like reading because children's books were either boring or old. Even the name "Blake" from "Blake and the Turtles" is related to hockey. I didn't pick it because it rhymed easily with snake, I picked it because another student in my learn-to-play class named Blake, told me when I start writing books, that I should put him in one. So I did. I even have a project on the back burner right now that has a tie back into the learn-to-play hockey class. There are lots of those, so don't be surprised if more come out as more books come out.

When you create a children's book, do you start with the writing or with the illustrations? How do they affect each other?
I always begin with the written part of the book first. Mostly because I feel like it's easier for me to change the writing and get a better idea of the images I want then it would be to write from the illustrations. Another reason is because I do have a friend who does some of my books illustrations for me, and it's worked out great with taking my time to get a good written story before I send it to her to illustrate it the way she wants. She's done the illustrations for the "Not So Bad Christmas Stocking" and "Blake and the Turtles." She's also working on a book currently that I'm hoping to have completed by the end of the year.

Is there anything else you'd like to tell BookPound readers?
One thing I would like to mention is that I love talking to people and learning about people's stories so don't ever be scared to email me or anything. I'm also working on something new I'm calling "donation books." They are books I will be collaborating on with a company/group and having my friend Shanilee illustrate. Once the book is done, I plan to give all the profits and rights to the group to assists them in financial help to support what they do. I am currently working on a book for the Colorado Veterans Project, and I have had talks with a group that does suicide prevention for teens. Fingers crossed.