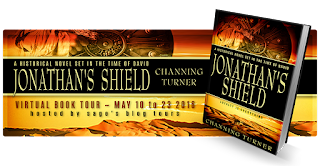 We're pleased today to bring you an interview with Channing Turner, author of Jonathan's Shield. Turner grew up in Arkansas and Louisiana before graduating from Louisiana State University in Psychology. He did graduate work in marine biology and became an estuarine biologist along the Texas Coast. He now lives in eastern Washington with his wife, Barb. 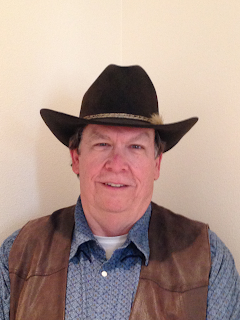 After a degree in psychology and graduate work in marine biology, how did your attention turn to writing historical fiction? Have you always had an interest in writing about the past?
I've always had an interest in writing. I had a great English teacher in high school many years ago who encouraged me to be a writer. Because of her I actually majored in English for a couple of years at LSU. I didn't see a career path there so I switched to psychology. Not that I had any particular love for psych—I just needed to keep my 2-S student deferment and it seemed an easy enough field of study. If you're old enough to remember the draft during Viet Nam you know what I mean.

Historical fiction is my favorite genre. I believe I started off reading about Horatio Hornblower in junior high. I still love sea sagas. A lot of this genre involves war and rumors of war, and I naturally gravitated to those stories. One thing I have learned from history is that there is nothing new under the sun about people. Humanity has been either depraved or noble ever since we realized there was a difference.

What kind of research was involved in writing Jonathan’s Shield?
Well the basic storyline wasn't so hard. I just followed 1st Samuel in the Old Testament, starting around chapter thirteen. It's really a compelling tale that has always fascinated me. As far as research? Whew. I had no idea how many books and articles—even magazines--there are about those Biblical times until I started. I studied ancient warfare, daily living, wedding customs, and a little geography.The more I found, the more I wanted to know. Most of my research was with a hard copy in hand. I like the heft of a book. I've added a few of them to my library.

Who are some of your favorite authors? Which authors have had the most influence over you as a writer?
In no particular order: James Lee /Burke ( Reading one of his now. He is also a Louisiana boy who moved to Montana. I really like the way he makes the setting part of the story.) Both Michael and Jeff Shaara, C.J. Box, Bernard Cornwell, Patrick O'Brian, and Larry McMurty.
I don't know how much influence any of them have other than I wish I could write like Burke.

What advice would you give to people who are interested in writing fiction but haven’t yet taken the plunge?
I found out that writing a book is hard. Nothing "just writes itself." Join a book critique group or a group of like minded writers. It's good to have at least some of them with actual publishing experience. Get an editor.

Are you working on any other writing projects currently? What’s next for you?
I have just finished a sort of modern day western/thriller where the new west meets terrorism. It's going through critiquing with my book group.at the moment. Then I'll submit it and see what happens. The very first novel I wrote was rejected by the publisher that's now handling Jonathan's Shield, but they at least gave it a fair reading first. They have asked if I'd rewrite it for them again knowing what I know now about book writing. It's been a couple of years, but I think I will.

Is there anything else you’d like to tell BookPound readers?
It takes a long time. First you write it. Have others besides your spouse and mother read it. It's good to have them read as you write it, say for instance chapter by chapter..Get folks who are writers themselves though and get a thick skin. Of course, you love your wording, your prose, the story, but If not everybody else gets it or likes it, It's not because they're dullards. It's because you didn't write it clearly enough.

Be prepared to market the book and yourself. That's a lesson I'm in the process of learning right now. In a way it's the hardest lesson of all.