REVIEW of AS THE SUN RISES by NATHAN SMITH 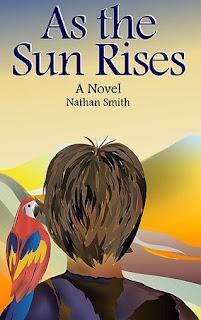 SUMMARY
A dying man pulls himself across the Sahara Desert. His only company, a talking macaw. And his only reason to continue, love. Somewhere across this desert is the girl who is worth everything to him. Flash back to the man’s childhood. He and his parents live in Guatemala City during the 1980s where there is talk of a communist rebellion in the jungle, and the whispers have reached the United States. Events force the boy and his mother to return to their ancestral home, a Mayan village deep in the jungle where rebels hide. During this time, the boy grows into a young man and falls in love with a girl who to him is worth everything. But then the genocides, funded by the United States, find their village.

REVIEW by Sara E. Dykes
As I read Nathan Smith's new work, As the Sun Rises, the recent passing of Harper Lee still rings fresh in my mind. Mr. Smith strives to do for the Mayan genocide of Guatemala what Ms. Lee did for Southern race relations: bring to the forefront something which is not readily discussed. However, there are striking differences. Ms. Lee's work discussed political and social issues which were merely uncomfortable or improper subjects for polite company. The subject discussed in As the Sun Rises, in contrast, I would wager is not discussed because most people have never heard of the Mayan genocide of Guatemala. Before reading this work, I had never heard of this issue, which I am sure is true for most Americans. It simply was not taught in our history books. This is of little surprise when one learns that it was we Americans who provided the weapons and ammunition with which these killings were committed. Therefore, I am grateful for Mr. Smith's work which not only dares to shed light on a little known political and historical topic, but lends to the thought process of how such a travesty occurred. A sage quotation of Harper Lee is apropos here: “The book to read is not the one that thinks for you but the one which makes you think.” As the Sun Rises does just that.

Blending Christian faith with Mayan legend, our tale begins with José's impossible adventure through the Sahara Desert. Starving, dehydrated, and on the brink of death, José quite literally crawls from one side of Africa to the other, struggling toward both a home and love lying across a vast ocean on yet another continent, neither of which he is certain wait for him there. Along his path, José receives help from Lupe, a Mayan god in disguise, and from Jesus who - just as in real life - is always there, but particularly when you need Him most.

The tale shifts between José's desert trials and his childhood in Guatemala. There we learn who José is, how he met his love, Elena, and how their love can be strong enough to drag him out of captivity, through one of the world's most barren lands, and across a broad ocean just for the hope that she awaits him there.

José experiences hardship and doubts on his journey. At some points, he even wants to quit. At some points, he does – or at least he tries. Nevertheless, Lupe's guidance and José's undying love for Elena push him onward toward his goal. His story brings to mind another Harper Lee truth:  “Real courage is when you know you're licked before you begin, but you begin anyway and see it through no matter what.”As the Sun Rises is a short work; I read it in one sitting. I could not put it down. It is a page turner. Mr. Smith's writing is moving and deep. His words not only tell an overarching story, but he has the power to drive home a point in just the few words of one statement. Two particular quotations struck me as I went through the book: “'Mama, look! Mama, it was Jesus and they asked him to leave.'” (p. 13) and “That day, the price of cola around the world became higher than it ever had before, even though one could still purchase a bottle with the same number of coins.” (p. 28)

The cruel captivity and torture that José experiences and the violence and murder that plague both the cities and villages of Guatemala are disturbing. Tales of woe, heartbreak, and death often are. Although the book focuses on José's journey through the desert, the story is compelling and brings a spotlight to an otherwise unmentioned tragedy in which our American government was complicit. I commend Mr. Smith for heeding that persistent nagging that would not relent until he brought this issue to light in writing. I recommend this book not only for its stunning story and writing, but for the education on this rarely touched issue. Thank you, Mr. Smith, for writing a book to make us think.