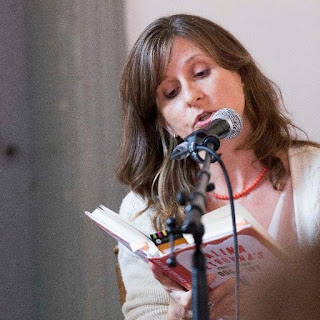 Andrea Bennett lives in Ramsgate, Kent, UK. Her debut novel Galina Petrovna's Three-Legged Dog Story has been translated into Italian, Spanish, German, Portuguese, and French. We're so glad to have her with us on the BookPound today. Thanks for taking the time, Andrea!

Who have been the biggest influences on you as a writer?
That's hard to say, as I haven't studied writing: I just decided to write a book and didn't think about the way I wrote it, the style or genre, or even the potential audience. I'm learning! I love the works of Mikhail Bulgakov, a Soviet writer of the 1920s - 1930s. I like the way he deals with serious subjects with humour and humanity. He was a writer who suffered greatly under Stalin, but his writing remains gentle, funny, intricate and hopeful.

I love light-hearted literate: PG Wodehouse is a favourite, especially when life is busy and I feel the need to get away from it all. I also love Graham Greene, Alan Bennett and Wilkie Collins.

You worked as a translator in Russia for several years. Do you think translating changed the way you write your own stories? What were some of your favorite experiences there?
Translating changed the way I think about words: it made me concentrate on their essence, their order, and the grammar too. I was a translator and editor, working mainly on laws, contracts and market reports. I was always being pushed to make things more succinct: to cut out everything that wasn't necessary. So it definitely helped me remember to get to the point.

I had a lot of interesting experiences in Moscow - mostly not to do with translating though! It was a city of huge contrasts: lines of poor old women outside the mainline stations trying to sell any old rubbish (like single spoons, single shoes) in order to scrape together the money for a loaf of bread, meanwhile the streets were clogging up with Hummers and Alfa-Romeos.

There was a lot going on culturally. Picture this: I remember a gay club that ran once a week in a Pioneer Club (like a Soviet scout club) out in the suburbs. Everyone was talking about it: pop stars would turn up and play, unannounced. There was no advertising, just word of mouth. The highlight of the evening was when a pair of male synchronised swimmers would dive into the fish tank (it was one of those ones that covers a wall) and do a fabulous swimming display to music, which would end with them whipping off their trunks. It sticks in my mind as one of those crazy Moscow nights. I should add here that Russian society is generally highly homophobic, so the whole thing was both crazy and brave.

Tell us about the process of writing Galina Petrovna's Three Legged Dog Story. 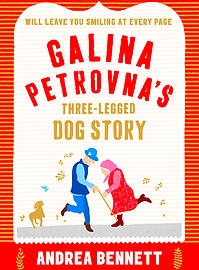 I started writing the story in spring 2012. I was in the middle of some difficult life changes and I found it really helped to sit down and write of an evening (or morning) instead of sitting around worrying or taking up smoking again. I had to force myself to sit down and concentrate, but after a while I really looked forward to that time spent with my characters. I found it very settling, and they were good company.

The story was based on kernel of truth, as they say: when I lived in Moscow I had a boyfriend whose family lived in Azov. And he had a grandmother who had a three-legged dog called Boroda. I met them both. The real Boroda was sadly taken away by the dog warden -- and unfortunately she was never returned. It was such a sad story, and my boyfriend's grandmother was such a feisty, strong woman: I just decided to rewrite real life. 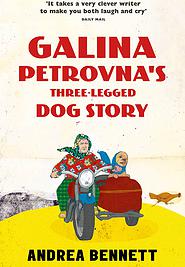 It took me about 18 months to complete, with long gaps where I did nothing, like when I moved house and at Christmas and the school summer holidays. When I'd just about finished it, a friend sent me an email telling me about the Borough Press open submission, where any unpublished and unagented writer could send in a completed manuscript and they'd pick one to publish. I couldn't believe it when my story was chosen: I was so amazed.

How is your son doing? We read your piece about him in The Telegraph.
My son Archie will be 18 at the end of January: I can't believe it! In some ways time really has flown. He is quite a character and is doing well, despite the special school he attended for 10 years being closed down due to financial difficulties just before Christmas. He is now attending another local school that specialises in supporting students with Autistic Spectrum Disorder, and he's settling in well. We've really been lucky in that he remains physically well and pretty robust. He also loves his food and a blustery dog walk.

As he's going to be 18 soon we have to start thinking about where he will live and how he will be supported in adult care (as opposed to children's services). It's a whole new ball game, but we know how it's played: we have to do the leg-work, and we have to hold our ground if we think he's being offered care that is not suitable. Onwards and upwards!

Are you working on any new writing projects? What's next for you?
I am working on a new book -- I'm just taking a break from it to do this interview! I have a deadline for the manuscript to be with my editor by mid-February, with a view to publication in February 2017. This novel sticks with the setting of the town of Azov, but we meet a new set of characters, and the tone is a little darker, although hopefully there are still plenty of laughs in it. Once this one is finished, I will start the next one - which will be a complete departure. I'm thinking 1980s coming-of-age small-town punk band near Birmingham: but we'll have to see what my publisher says.

Is there anything else you'd like to tell BookPound readers?
I'd like to say that you don't have to be interested in Russia to like Galina Petrovna's Three-Legged Dog Story: just people's stories. And also that it will be available in paperback in the USA as of 3rd May!