REVIEW of THE RIVER by GARY PAULSEN 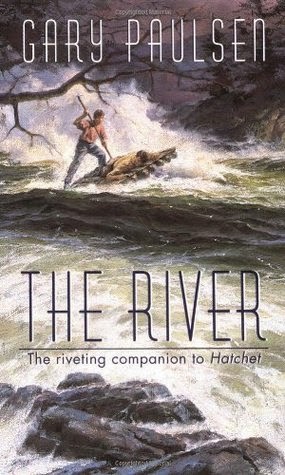 SUMMARY (courtesy of publisher)
"We want you to do it again."

These words, spoken to Brian Robeson, will change his life. Two years earlier, Brian was stranded alone in the wilderness for fifty-four days with nothing but a small hatchet. Yet he survived. Now the government wants him to do it again to go back into the wilderness so that astronauts and the military can learn the survival techniques that kept Brian alive.
This time he won't be alone: Derek Holtzer, a government psychologist, will accompany him to observe and take notes. But during a freak storm, Derek is hit by lightning and falls into a coma. Their radio transmitter is dead. Brian is afraid that Derek will die of dehydration unless he can get him to a doctor. His only hope is to build a raft and try to transport Derek a hundred miles down the river to a trading post if the map he has is accurate.
REVIEW

Brian Robeson is a unique character. He's young in age, but he has the maturity introspection that come with hardship and trauma. Sometimes it's easy to forget that he's just a teenager, and a fairly young one at that, because he's level-headed, cool, and very intelligent. And yet, Gary Paulsen does an incredible job of narrating the conflicting and torturous thoughts Brian wrestles with during his harrowing ordeal.
This is a great boy book. It's about danger and courage, and the conflict centers around that timeless, ageless nemesis: nature. But what I appreciate most about this book is the internal struggle a boy must confront. His will to survive is incredibly strong and well-honed, but now he has to face the challenge of trying to save another. He has to discover whether he has the character and integrity necessary to put someone else's needs ahead of his own, and this is a huge undertaking for one so young and in such trying circumstances.
There's a great audiobook version of The River. If you have a car full of boys and you're driving across the country, you need a copy of this audiobook. It would also make a great homeschool literature unit for teenage boys.
Labels: review YA