REVIEW of THE ROAD TO NYN by BRIAN MICHAUD 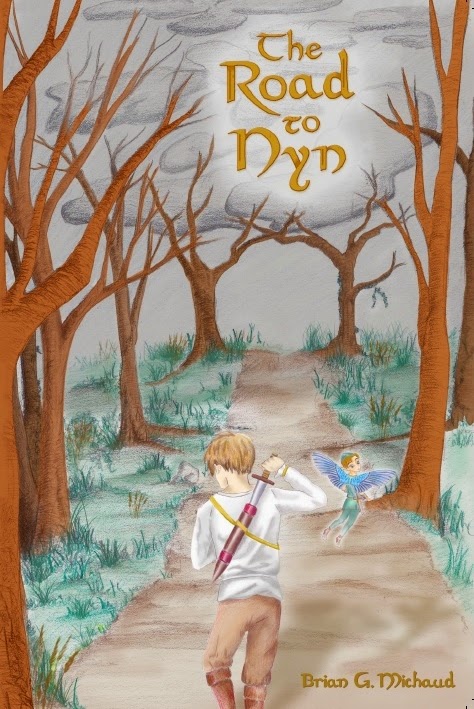 SUMMARY (From Goodreads)
In a land where magic is outlawed, a young boy is living a double life. Although Kay is training to be a knight, he has been secretly studying the forbidden ways of magic with Alamin, a powerful but eccentric wizard. When a band of goblins raids his village and enslaves his family and friends, Kay embarks on an adventure that takes him across the Kingdom of Gaspar and into the dark and treacherous caves of the Goblin Realm. What Kay doesn’t realize is that his journey is leading him on a collision course with the Lord of Nyn – a being so powerful that none dare face him...not even Alamin himself!

REVIEW
The Road to Nyn really captures the adventurous spirit of teenagers without resorting to the Hollywood-flavored dystopian adventures, which is so refreshing. No, this adventure novel retains a solid good-versus-evil conflict while offering some truly delightful characters. Allow me to introduce you to a few of them.

Kay is the protagonist, and he's likable from the start. That doesn't mean he's perfect; it means he has great intentions, just like you and me, but he's not perfect (like me. I can't speak for you). He has what it takes to fit in with mainstream society, but he knows there's more than that, and he isn't afraid to straddle both spheres, which makes him indispensable when evil comes around.

If you like Dumbledore and Gandalf, you'll love Alamin. He's the wise, down-to-earth sage of the story, but he somehow seems more modern and present than the afore-mentioned mentors. I have a feeling there's an old hippie teaching guitar at my local music store who is just exactly like Alamin. What more could a teenaged adventurer want than a mentor who actually knows magic but can shrug off the novelty as if magic were as humdrum as corn meal mush?

I've always wondered what a sprite is, and Michaud offers a pleasing answer with Felix. He's little and spunky, and he talks to himself when confronted with a dragon. He makes me wish I had a small shape-shifting friend who is absolutely loyal to me.

And then there's Deriah the elf. She's beautiful and she looks fragile, but she's strong, wise, and fearless. She's just the sort of woman to inspire a young squire to be braver than he's ever been before, but she's certainly no distressed maiden. She's a teammate on a quest to defeat evil and restore a civilization.

If you're looking for a dynamic cast of characters to spend time with, pick up a copy of Brian Michaud's The Road to Nyn. If you've already read it, tell us about your favorite character. Better yet, tell us which character you would want to be if you could jump into the story. But don't spoil the fun for those who have yet to embark on the adventure by giving too much away.
Labels: book review fantasy review