REVIEW of BITTERBLUE by KRISTIN CASHORE 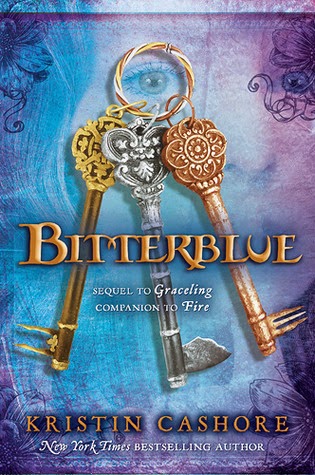 SUMMARY
Eight years have passed since the young Princess Bitterblue, and her country, were saved from the vicious King Leck. Now Bitterblue is the queen of Monsea, and her land is at peace.But the influence of her father, a violent psychopath with mind-altering abilities, lives on. Her advisers, who have run the country on her behalf since Leck's death, believe in a forward-thinking plan: to pardon all of those who committed terrible acts during Leck's reign; and to forget every dark event that ever happened. Monsea's past has become shrouded in mystery, and it's only when Bitterblue begins sneaking out of her castle - curious, disguised and alone - to walk the streets of her own city, that she begins to realise the truth. Her kingdom has been under the thirty-five-year long spell of a madman, and now their only chance to move forward is to revisit the past.Whatever that past holds.Two thieves, who have sworn only to steal what has already been stolen, change her life forever. They hold a key to the truth of Leck's reign. And one of them, who possesses an unidentified Grace, may also hold a key to her heart . .

In the last of the Graceling trilogy, we return to the Seven Kingdoms approximately ten years after the end of Graceling. In Bitterblue, the title character attempts to manage her kingdom as a young woman while coping with the kingdom's scars from King Leck's mind-altering Grace. Will Queen Bitterblue ever make amends for the terrors executed by her father?

Bitterblue has grown over the past ten years into a free-thinking and caring young woman. She cares for her people and wants to advance their education to make up for the time they lost under Leck's rule where learning and reading were prohibited. However, Bitterblue grows tired of constantly being treated as a child, despite her advancing age. She begins to distrust her advisors and yearns to see for herself what happens in her city beyond the castle walls.

Through close-call action scenes mixed with spying and espionage, Bitterblue discovers mysteries that all lead back to her father. Her life is in danger as well as her plans for her kingdom. Bitterblue is disheartened to find that Leck is still controlling her city and members of her kingdom, almost ten years after his death.  This story is full of trickery and deceit on all levels and for a myriad of reasons. Bitterblue wants to get to the bottom of the mysteries and Leck's continuing effects on her kingdom. Many around her do not want the true nature of atrocities discovered, and they will do anything to stop her.

As a sequel to Graceling, Katsa, Po, and some others once again make an appearance, as well as some new characters. Of important note is Sapphire, otherwise known as Saf. Sneaking out of the castle at night, Bitterblue befriends him, though he has no clue that she is the queen. Bitterblue also has several advisors, among among whom is her librarian, Death (pronounced “deeth”), who possesses the ability to read, retain, and recite absolutely anything he ever reads or sees. This Data-like quality (see Star Trek: The Next Generation) becomes absolutely essential to Bitterblue solving the mysteries still plaguing her kingdom. Also making an appearance, building on Fire, and rounding out the companionship of the two novels, is Lady Fire herself.

I found this story a nice way to end the trilogy. The first story from Graceling is finished. The characters from Fire and their influence on King Leck are finally connected. Bitterblue learns to stand up for herself and truly begins to rule as an independent, thoughtful woman. As with the first two books, this one contains a sexual encounter, but no detail. Also, there are dark themes in this novel. Though not presented in detail, the novel contains violence against women, animal cruelty, post-traumatic stress issues, heavy guilt issues, treachery, murders, and suicides. Despite the heavy tone, overall, I enjoyed the novel and the series.