REVIEW of WITHOUT RESERVATIONS by ALICE STEINBACH 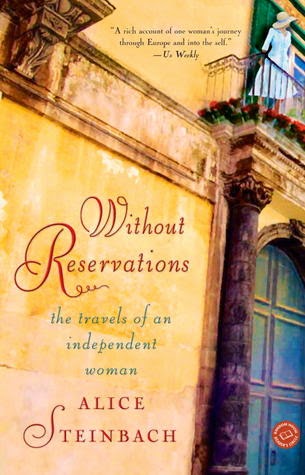 WITHOUT RESERVATIONS: THE TRAVELS OF AN INDEPENDENT WOMAN
Alice Steinbach
Random House
2002

SUMMARY
"In many ways, I was an independent woman," writes Pulitzer Prize–winning journalist Alice Steinbach. “For years I’d made my own choices, paid my own bills, shoveled my own snow.” But somehow she had become dependent in quite another way. “I had fallen into the habit of defining myself in terms of who I was to other people and what they expected of me.” But who was she away from the people and things that defined her? In this exquisite book, Steinbach searches for the answer to this question in some of the most beautiful and exciting places in the world: Paris, where she finds a soul mate; Oxford, where she takes a course on the English village; Milan, where she befriends a young woman about to be married. Beautifully illustrated with postcards from Steinbach’s journeys, this revealing and witty book transports you into a fascinating inner and outer journey, an unforgettable voyage of discovery.

As an independent woman, not yet as well-traveled as I'd like, I try to read books that feed my sense of adventure. It's my way of traveling without breaking out the passport or purchasing plane tickets. Without Reservations fed that sense. This was a short book, a hybrid of travel story mixed with memoir. I would classify it in the Eat, Pray, Love category, though not as deep spiritually as EPL. That does not mean, however, that Without Reservations is not fulfilling. It is delightfully so.

When the book begins, Alice Steinbach finds herself at a crossroads of sorts. I would decline to call it a mid-life crisis. It smacks more of a mid-life assessment. Steinbach takes a look around and assesses her life. Mother of two successful adult sons. Empty nester. Top notch journalist. Cat lover. She starts pondering whether the life that she loves and knows, the life she has created for herself, is all her life will ever be.

This process leads her to take a one year sabbatical to travel. In that year she visits Paris, London, and several locations throughout Italy. Despite having previously lived in Paris, reacquainting herself with the city and her old haunts prove an adjustment. Each day, no matter how simple is filled with something new.

As is typical with travel memoirs, Alice finds rest, amusement, food, fun, friends, laughter, and love. First things first, Alice takes time to relax and find herself again, enjoying living without the pressures of her regular life, but still fighting the urge to participate in it, even from Europe. She becomes a local in each city she visits, and makes friends easily and randomly along the way. At one point, she becomes seriously ill, and her newly found friends nurse her through the condition. Of course, no travel memoir is complete with its love story. In particular, Alice randomly meets a man on a train during one of her adventures. They begin a romance which lasts beyond the travels of the book.

Overall, Without Reservations is a well-written tale. The author does a good job of explaining the sights and sounds without being overly pedantic. She also offers hints for travel. A particular tidbit of her travels that I hope to take forward in the future is her habit of mailing a postcard home to herself as a souvenir and reminder of that day's activities.

Sara E. Dykes enjoys reading and writing. The combination of writing about what she reads is only natural to her. Sara is a Georgia licensed attorney, currently residing in Dallas, Texas.
Labels: book review review sara e. dykes