REVIEW of I STILL DREAM ABOUT YOU by FANNIE FLAGG 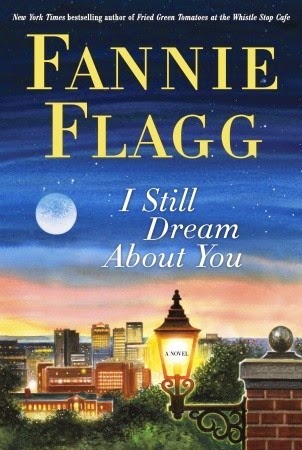 I STILL DREAM ABOUT YOU
Fannie Flagg
Random House
January 1, 2010

SUMMARY
The beloved Fannie Flagg is back and at her irresistible and hilarious best in I Still Dream About You, a comic mystery romp through the streets of Birmingham, Alabama, past, present, and future.Meet Maggie Fortenberry, a still beautiful former Miss Alabama. To others, Maggie’s life seems practically perfect—she’s lovely, charming, and a successful real estate agent at Red Mountain Realty. Still, Maggie can’t help but wonder how she wound up in her present condition. She had been on her hopeful way to becoming Miss America and realizing her childhood dream of someday living in one of the elegant old homes on top of Red Mountain, with the adoring husband and the 2.5 children, but then something unexpected happened and changed everything.Maggie graduated at the top of her class at charm school, can fold a napkin in more than forty-eight different ways, and can enter and exit a car gracefully, but all the finesse in the world cannot help her now. Since the legendary real estate dynamo Hazel Whisenknott, beloved founder of Red Mountain Realty, died five years ago, business has gone from bad to worse—and the future isn’t looking much better. But just when things seem completely hopeless, Maggie suddenly comes up with the perfect plan to solve it all.As Maggie prepares to put her plan into action, we meet the cast of high-spirited characters around her. To Brenda Peoples, Maggie’s best friend and real estate partner, Maggie’s life seems easy as pie. Slender Maggie doesn’t have to worry about her figure, or about her Weight Watchers sponsor catching her at the Krispy Kreme doughnut shop. And Ethel Clipp, Red Mountain’s ancient and grumpy office manager with the bright purple hair, thinks the world of Maggie but has absolutely nothing nice to say about their rival Babs “The Beast of Birmingham” Bingington, the unscrupulous estate agent who hates Maggie and is determined to put her out of business.

I Still Dream About You spins the tale of a former Miss Alabama, Maggie Fortenberry. When the novel begins, Maggie has come to a decision. She has decided to drown herself in the river. Maggie is an aging beauty queen who never really discovered herself. Aging does not appeal to her, and she has made a calm, rational decision on the matter.  She spent most of her life utilizing her beauty and developing talents associated with the old Southern way of living, ones that would make Martha Stewart proud. Her dear friend Hazel rescued her and set her on the real estate path, but, now that Hazel is gone, Maggie once again feels passionless. The novel follows Maggie as she makes several attempts to end her life. Somehow, something always gets in the way. Eventually Maggie learns some important life lessons, including that every single day in itself is beautiful no matter what happens.

Maggie takes a few friends (and an enemy) along on her journey. Maggie's best friend, Brenda, is a real estate agent with political ambitions and a penchant for sweets. She desires to be the first African-American female mayor of Birmingham.

Also joining them are Ethel, a hilarious, ranting octogenarian, and Hazel, their gone, but not nearly forgotten leader. Of course, no story would be complete without its antagonist. Babs “The Beast of Birmingham” Bingington rounds out the cast as a ruthless real estate competitor. Her actions put her in the running for another title that begins with “B.”

As for the setting, Fannie Flagg does Birmingham justice, trying to incorporate all the great, old things about the city. She also covers the conflict between the image the city maintains because of the horrors there during the 1960s and the struggle to move beyond it, which is as much a part of the city as the physical landmarks.

Overall, I enjoyed this novel. This novel made me laugh in just the right parts. Some parts dragged, and I was tempted to stop at one point, but I trudged forward. I am glad of that decision. There also was some repetition, and the cohesion of the subplots was not the best. Nevertheless, I Still Dream About You remains a good story of finding one's self and rediscovering life again.

Sara E. Dykes enjoys reading and writing. The combination of writing about what she reads is only natural to her. Sara is a Georgia licensed attorney, currently residing in Dallas, Texas.
Labels: review sara e. dykes