REVIEW of GRACELING by KRISTIN CASHORE 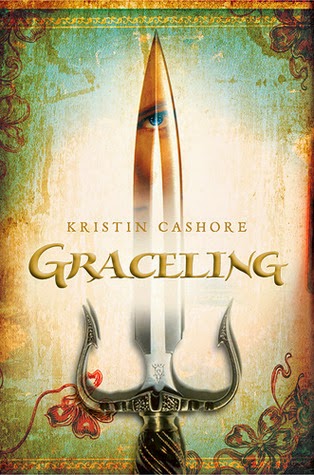 SUMMARY
Katsa has been able to kill a man with her bare hands since she was eight - she's a Graceling, one of the rare people in her land born with an extreme skill. As niece of the king, she should be able to live a life of privilege, but Graced as she is with killing, she is forced to work as the king's thug.When she first meets Prince Po, Graced with combat skills, Katsa has no hint of how her life is about to change.She never expects to become Po's friend.She never expects to learn a new truth about her own Grace - or about a terrible secret that lies hidden far away...

Welcome to the Seven Kingdoms. Here, certain people, called Gracelings, possess skills far enhanced from regular people and different from each of the other Gracelings.

One of these Gracelings is Katsa, a fiercely independent and feisty young woman. She never intends to fall in love, marry, have children, or do any of the things a traditional woman would. In Katsa's homeland, all Gracelings belong to the king, who just happens to be her uncle.

Katsa's Grace is fighting.  The king forces Katsa to use her skills for evil, rather than good or defense. Nevertheless, Katsa skirts her uncle's evil will. She forms a secret society, tasked with performing missions for good. On one of these missions, she runs into Po, another Graceling who also fights incredibly well. As luck would have it, Po is more closely tied to the mission than Katsa would have thought. Po turns out to be a formidable opponent for sharpening her fighting skills. Eventually, Katsa and Po team up outside the practice ring to solve a kidnapping mystery and protect Princess Bitterblue, Po's niece, from her father, the evil King Leck. During their journey, Katsa and Po's friendship burgeons into something more.

This is a young adult fantasy novel. It contains fighting, supernatural abilities, and romance. As a warning, this novel does contain premarital relations. There are no graphic sexual scenes, but, just as in classic film, the acts are suggested and then the scene fades to black.

Having read other reviews, I found that a chief complaint of this novel was Katsa's attitude. Many find her spoiled. On a certain level, she is. She's the best fighter for seven kingdoms – even better than the kings' men. Part of her personality comes from the confidence in those abilities, and she is merely assured in those abilities. In other words, she believes in herself.

Despite Katsa's slightly spoiled attitude, she also possesses a strong heart and dogged determination. She is determined to protect Po and Bitterblue at any cost. Katsa's snow-blown trek through the mountain pass proves that she never gives up, especially when it concerns people she loves.

In the end, this story is well-written and creative. I found the concept of Gracelings fresh. The characters are vivid and likeable. The scenery and settings are well-written. The romance is believable, particularly Katsa's struggle when she actually realizes she loves Po. Overall, I enjoyed this novel, and have begun the other two books of the trilogy.