REVIEW of FIRE by KRISTIN CASHORE 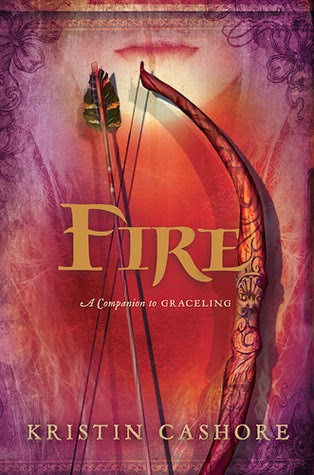 SUMMARY
It is not a peaceful time in the Dells. The young King Nash clings to his throne while rebel lords in the north and south build armies to unseat him. The mountains and forests are filled with spies and thieves and lawless men.This is where Fire lives. With a wild, irresistible appearance and hair the color of flame, Fire is the last remaining human monster. Equally hated and adored, she had the unique ability to control minds, but she guards her power, unwilling to steal the secrets of innocent people. Especially when she has so many of her own.Then Prince Brigan comes to bring her to King City, The royal family needs her help to uncover the plot against the king. Far away from home, Fire begins to realize there's more to her power than she ever dreamed. Her power could save the kingdom.If only she weren't afraid of becoming the monster her father was.

Fire tells the story of the young female title character. Though not royalty, she was raised as a ward of a prominent family. Thus she is known as Lady Fire. She is a monster, a term used for animals and humans that display radiant, entrancing colors and possess extraordinary mental powers. Specifically, Fire can read and control minds. Because of her father's cruelty when using his powers, Fire dislikes using hers. However, when the kingdom needs her powers to prevent a war, she concedes that using them for a positive purpose would be acceptable.

Throughout the story, two men vie for Lady Fire's heart:  Archer, the young man with whom she was raised and loves like a brother (though they were lovers at one point), and Prince Brigan, a dashing young prince known as The Commander, the second in line to the throne, who has a softer side than many would think. These two clash at times, though Fire's choice is quite clear. She loves Brigan.

Following on the heels of Graceling, the second novel of the trilogy, Fire, was a slight disappointment.
Unlike Graceling, this story takes place in the Dells, not the Seven Kingdoms. The only thing the two novels share is a bit of backstory on King Leck, from the first novel. Fire tells a story composed mostly of political intrigue rather than action and adventure. With a war waging, action and adventure are certainly to be had, but not as much as I had expected. Mostly Lady Fire is locked in the king's castle performing espionage. She does have one scuffle and adventure, and that is where the young Leck comes into the story. However, after that ordeal, Fire returns to espionage and nursing at the war front. Other than the backstory for Leck, I would not consider Fire part of the Graceling realm to be included in the trilogy.

Nevertheless, I give Ms. Cashore positive notes for her heros. Once again, as I did with Po in Graceling, I, too, came to love the main love interest. Prince Brigan is the strong, silent type, but he observes everything. Also, his aptitude for communicating with Fire through her mental abilities proved his strength to me. As a warning, this novel contains some premarital relations without graphic detail. Overall, Fire was not a terrible novel, but it fell short of my expectations.