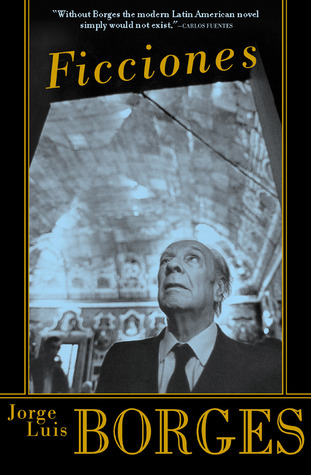 SUMMARY
The seventeen pieces in Ficciones demonstrate the whirlwind of Borges’s genius and mirror the precision and potency of his intellect and inventiveness, his piercing irony, his skepticism, and his obsession with fantasy. Borges sends us on a journey into a compelling, bizarre, and profoundly resonant realm; we enter the fearful sphere of Pascal’s abyss, the surreal and literal labyrinth of books, and the iconography of eternal return. To enter the worlds in Ficciones is to enter the mind of Jorge Luis Borges, wherein lies Heaven, Hell, and everything in between.

ESSENTIAL READING FOR THE WRITER

My copy of Borges’ Ficciones has seen better days. The top-right corner bears an ugly bend. The spine is dented and marked. Even the design on front cover has begun to fade. My “Ficciones” doesn’t have many good years left, so I let it sit and breathe and collect dust on my shelf with all the other fictions I may never have the time to read.

I picked it up again last week, when the death of Gabriel García Márquez reminded the world about the power of magical realism and reminded me that “Gabo” would have not been Gabo without the influence of Borges.

If Borges is a writer’s writer, then “Ficciones” should be required reading for all storytellers. First published in 1944, it remains his most popular collection of short stories and serves as a perfect introduction to the style and themes that obsessed the Argentine writer and poet.

“Funes the Memorious” features a recluse who can remember everything he has ever experienced. In “Tlon, Uqbar, Orbis Tetrus,” a secret society invents a country through an encyclopedia.  “Death and the Compass” is a detective story that mixes murder, religion, and geography.

Borges was the master of the sophisticated narrative concept and nowhere is this more at play than in “Ficciones.” His stories are at once mythological and nostalgic, a sense of fantastical suspended in reality.

Borges’ most prominent literary flaw may have been his character development. His outlook is so specific, his world so particular, that the only voice that comes across in his writing is his own. The titular character of “Pierre Menard, Author of don Quijote,” his satirical take on literary criticism, is essentially Borges. Detective Lönnrot of “Death and the Compass” is devoid of any personality beyond what connects him to the case.

That’s why Borges is at his strongest when his first person narrative doesn’t call attention to character and allows the reader to completely engage in the story. Take the final story of the collection, “The South,” where a man recovers from a head injury through a pilgrimage to his old family estate. The tone- haunting- and its symbolism- an inescapable past- is Borgensian storytelling at its purest. Yet what makes it an essential piece of literature is its perfect sentence structure.

“The solitude was perfect, perhaps hostile, and it might have occurred to Dahlmann that he was traveling into the past and not merely south,” he writes. More than any of his contemporaries, Borges turned writing into an exercise in visual imagery. And the importance of cinematic literature, of externalizing the internal, has been passed on through the generations. You can see it in the writings of García Márquez, Toni Morrison, and Umberto Eco.

But it all began with Borges- and Ficciones is the place the start.

Valeria Rotella studies film and journalism at New York University. She’s interested in the intersection of politics and culture, enjoys the music of Gotan Project, and has gotten carsick in almost every country in South America. Follow her on Twitter @ValRotella.
Labels: book review review Valeria Rotella