REVIEW of WORDS BY HEART by OUIDA SEBESTYEN 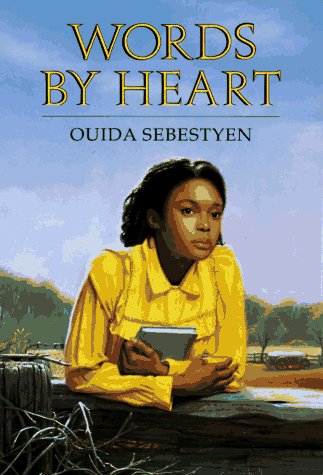 SUMMARY
Lena can recite the Scriptures by heart. Hoping to make her adored Papa proud of her and to make her white classmates notice her "Magic Mind," not her black skin, Lena vows to win the Bible-quoting contest. But winning does not bring Lena what she expected. Instead of honor, violence and death erupt and strike the one she loves most dearly. Lena, who has believed in vengeance, must now learn how to forgive.


The theme of separateness rings throughout Words by Heart. From the first scene of the book, we see Lena up on a stage in front of the whole town. Obviously, from her skin color, she is immediately separated from the other children in the scripture contest. But then, when she wins, the town leaders once again separate her when they give her a tie for a prize, a boy’s prize. Even in her family, Lena feels separateness. She feels extremely close to her father, but she has a stepmother who is not too much older than she is. And Sebestyen separates Lena from the younger children by creating a vast difference in their ages. Hence, Lena feels separated from almost everyone in her world—from everyone except her gentle father. This theme of separateness makes the lesson about forgiveness at the end all the more poignant.

Going back to the first scene, Lena views the scripture contest as a way to bridge the gap between herself and the rest of the children in the town. As a black newcomer in a mostly white community, Lena’s eager to make new friends and be accepted. While on the stage, she feels the weight of their eyes on her. And when she recites the Song of Solomon scripture—“I am black but comely”—she feels she has given away something special, something sacred to herself and her heritage. But she feels a connection with her opponent as they memorize scriptures together in harmony, one after the other, verse by verse.

Even in her own family, Lena feels a sort of separateness. Of course, she loves her stepmother and half brother and sister, but they’re not completely hers. She doesn’t feel the same “wholeness” of connection with them that she does with her father. Lena also comes to realize that her stepmother is not that much older than she is, and this makes Lena feel like less of a daughter to her than a helper. In several parts of the novel, Lena seems more like a baby-sitter to the younger children than a sister—although those two positions are often one and the same. Lena feels closest to her father because he has been a constant in her life and shares all of her memories. The closeness she feels to her father makes the lesson in forgiveness more difficult and poignant than it could with any other character.

It’s easy to see where Lena gets her background in the Bible. Her father sometimes sounds like a walking Sermon on the Mount, but he doesn't know the Bible just on the surface; he has integrated it into the deepest recesses of his soul. And when tragedy strikes, Lena finally starts to understand.

This is a beautifully written book with wonderful themes of forgiveness, racism, and family relationships. There's an old 1985 TV movie based on the book that was nominated for two Primetime Emmys.
Labels: book review ouida sebestyen words by heart YA