REVIEW of THE ROBBER BRIDE by MARGARET ATWOOD 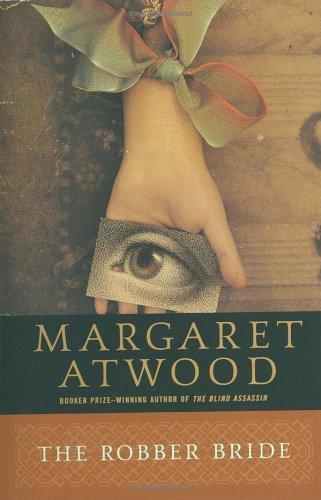 SUMMARY
Margaret Atwood's The Robber Bride is inspired by "The Robber Bridegroom," a wonderfully grisly tale from the Brothers Grimm in which an evil groom lures three maidens into his lair and devours them, one by one. But in her version, Atwood brilliantly recasts the monster as Zenia, a villainess of demonic proportions, and sets her loose in the lives of three friends, Tony,  Charis, and Roz. All three "have lost men, spirit, money, and time to their old college acquaintance, Zenia. At various times, and in various emotional disguises, Zenia has insinuated her way into their lives and practically demolished them.

Margaret Atwood interlaces good suspense and great characterization so well in this book that readers will turn the pages just to find out what becomes of these life-like characters.  I wondered if the three friends in this book, Roz, Tony, and Charis, were actual friends of the author; they seemed so real and so like best friends. They’re characters you’ll remember long after the story is over and, if you’re like me, you’ll miss them.

Roz, Tony, and Charis have been friends for years.  They are very different from each other, one a hippy-type romantic, one a soul-searching single mother, and one a brusk (we think) history professor who specializes in war.  They meet together in a restaurant regularly to talk and catch up, sympathize with each other, and offer support.

Perhaps one of Atwood’s most interesting characters, Zenia has jilted each of these women individually at different points in their lives.  She’d have to have a name like Zenia—no Jennifer or Marcy would do. Zenia could be described as a man-eater (isn’t that an 80’s pop song?  She would have been perfect for the video).

Although it’s difficult to imagine a person in real life who resembles Zenia, she becomes believable through her interactions with the other characters.  Also, the repercussions she has on the lives of the other three main characters make her not only real but nightmarish. Perhaps that’s what makes Zenia so scary: she might be a person who could enter your life, and then where would you be?

If for no other reason (though there are many), read this book for the ending.  It’s fabulous, perfect for a movie, which is probably why there was a film adaptation released in January 2007. Mary-Louise Parker plays Zenia. I haven't seen the film, but I hear that several characters were added and the childhood flashbacks were eliminated. I think I want to keep the novel intact in my brain by not watching the movie. But if you love film adaptations, see if you can find it AFTER you read the book. Vegetables first.

And one more thing, isn't the cover art fantastic? If ReneMagritte were still alive in 1993, I'd suspect him of coming up with the image.
Labels: fiction Margaret Atwood The Robber Bride