REVIEW of PEN ON FIRE by BARBARA DEMARCO-BARRETT 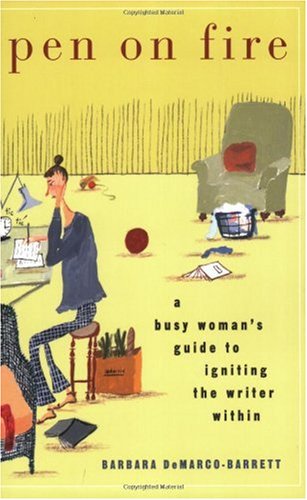 SUMMARY
In her fifteen years of teaching, Barbara DeMarco-Barrett has found that the biggest stumbling block for aspiring writers (especially women) is not fear of the blank page but frustration with the lack of time. What woman doesn't have too much to do and too little time? Finding an hour free of work, children, or obligations can seem impossible.But anyone can find fifteen minutes, whether you're sitting in traffic, waiting at a child's soccer practice, or watching the coffee drip. DeMarco-Barrett has created a practical, inspirational guide for fitting serious writing into those stolen moments. She offers writing exercises and techniques for generating ideas, as well as pragmatic advice from the well-known authors who appear on her radio show. With fifteen minutes a day, she can help you to ignite your pen and become the writer you have always wanted to be.

Barbara DeMarco-Barrett seems to have been around the block, as far as writers go. Pen on Fire is written in tiny little chapters, each chapter having an exercise to do afterwards. After a while, I started skipping the exercises because when I read a book, I just want to read it. But if you like the workbook thing, go for it.

Here’s an example of one of her exercises: “Every day for a week spend fifteen minutes writing in a different location. Write at a desk, on the couch, on the bathroom floor, at the park, at a restaurant, or on a bus…” Sounds fun.

In my exercise-skipping way, I made it through this book swimmingly. She divides her little chapters into sections: before you begin, getting started, tools & rituals, mining your life, craft, overcoming the obstacles, and living the life.

Hers is an honest writing style, and she includes many, many quotes from other writers who have talked on her radio show. I appreciated her firsthand experiences with writing, especially the parts about editors sending things back to be changed or waiting endlessly to hear about a publication. The only time I thought she was lying was when she wrote that her five-year-old’s favorite foods were broccoli, tofu, greens, cantaloupe, and milk.

De-Marco-Barrett is a fair writer. She doesn’t cover just one point of view. She includes writers’ opinions that conflict, which tells me that there isn’t one right way to write. And that couldn’t be truer. Some writers say to never talk about a work in progress. Some say that you must talk it over with a writing buddy or your agent. Some writers think you must focus only on your current project; some think you should have many works in progress to keep the creative juices flowing.