REVIEW of THE INHERITANCE by LOUISA MAY ALCOTT 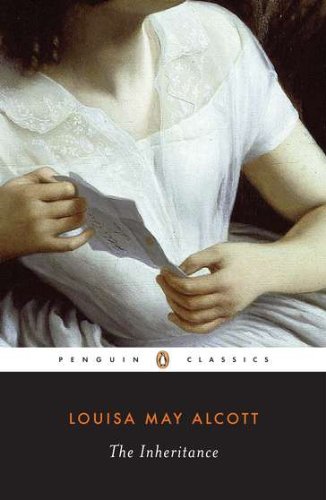 SUMMARY
Louisa May Alcott, who spent much of her childhood amid an intellectual circle that included Ralph Waldo Emerson, Henry Thoreau, and Nathaniel Hawthorne, embarked on her own literary efforts at an early age. Her recently discovered first novel, The Inheritance, written when Alcott was just 17, offers readers a fascinating look at the birth of a remarkable career.

Influenced by the melodrama of the contemporary theater, the sentimental romances she read as a child, and the popular gothic novels of the time, Alcott weaves a tale far removed from the reality of her everyday life in Boston. The Inheritance, set in an English country manor, is the story of Edith Adelon, an Italian orphan brought to England by Lord Hamilton as a companion for his children. With a charm reminiscent of Jane Austen's novels, Alcott's plot sets love and courtesy against depravity and dishonor -- and with the help of a secret inheritance, allows virtue to prevail.
In their Introduction, Joel Myerson and Daniel Shealy relate their fortuitous discovery of Alcott's manuscript draft of The Inheritance (preserved at the Houghton Library of Harvard). They explore the forces -- both literary and personal -- that shaped the novel, and study how it foreshadowed Alcott's later work.

The Inheritance is Louisa May Alcott’s first novel, written when she was just seventeen years old.  The handwritten novel was discovered in the Harvard library in 1988.

Unlike the Little Women books, The Inheritance is a sensational novel, not unlike the stories Jo writes to earn money for her family in Little Women.  Because of its sensational nature, modern readers may tire of the seemingly archaic plot and characters.  Also, Alcott’s youthfulness and immaturity as a writer are apparent, but anyone interested in history or Alcott as a person will enjoy this insight into her writing maturation process.

The story is about Edith Adalon, an Italian orphan. Lord Hamilton, an English nobleman, finds her on a trip to Italy, and enchanted by her lovely singing voice, takes her home to be a companion to his little daughter. Lord Hamilton dies, and Edith stays on with the Hamilton family, though she must put up with the petty jealousies of Hamilton relatives.

Edith has a secret past, unknown to all except a repentant old man who confesses all on his deathbed. She must withstand the unwelcome advances of a doltish suitor, but she finds true love with the noble Lord Percy, and happily, this event coincides with the realization that she is the inheritor of the grand estate.

Clearly, the plot twists are more important to Alcott than deep characterization.  She stresses truth, loyalty, and honesty in this happily-ever-after didactic novel. Edith’s character is always benevolent, always long-suffering, and always kind. She is a wonderful ideal, but Alcott’s later characters, such as those in Little Women, seem much more human.

Apparently, Alcott never tried to get this novel published, but it’s a fun read and shows how autobiographical the character of Jo was to Alcott.